For thirty years,
This club’s been our “oyster” ranch,
And we members
Pearls growing within her dance,
Polishing and developing daily
Our word-writing romance;

“This collection is a testimony to the power of words, and to those gifted writers who have run them together like strands of precious pearls. Essay, poem, short story — each one sings out and captures our imagination … and our heart.”

“Through this anthology of short stories, imaginings, and poems,” says CWC Editor, Rita Keeley Brown, “our current members share their adventure of writing.”

A quote from Truman Capote, taken from the back cover of the  anthology, aptly sums up the work: “What I am [we are] trying to achieve is a voice sitting by the fireplace telling you a story on a winter’s evening.”

I followed my poem’s advice: “Dare to Fail or Fail to Dare,” and submitted three poems for this year’s Anniversary Anthology. Check out mine and other entries submitted by our club’s gifted writers.

Hoping you enjoy our latest Anthology as much as I who will soon be snuggled up by the fireplace reading it again, reaping rewards of time well spent.  ~ Stephany Spencer

Below is the cover of our Anniversary Anthology,
“Cascade of Pearls,”  sold on Amazon.com. 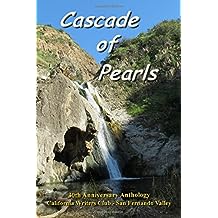 Here are two samples of work composed by Nance Crawford, one of the amazing authors and poets in our California writers club. Enjoy!